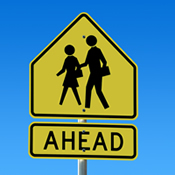 In September 2013 the State of Michigan released the Michigan Pedestrian and Bicycle Safety Action Plan 2013-2016. The primary goal of the Governor’s action team is to decrease motor vehicle pedestrian crashes 15% by 2016. More people walking, more vehicle code violations, increasing distracted driving because of cell phones, and driver impairments (e.g., intoxication) are contributing to a higher and higher number of motor vehicle-pedestrian crashes in Michigan crosswalks and on sidewalks. In 2013, for instance, motorists in Michigan hit 2,392 pedestrians, killing 149 and injuring 1,941. The Michigan team is working to reduce crashes through increased awareness, education, new laws, and new agency programs.

Motorists Crashing into Pedestrians are Increasing in West Michigan

The City of Grand Rapids is Michigan’s second-largest urban area and growing. The mayor and local officials promote an image of a safe and clean downtown and eclectic mix of walkable neighborhoods. Foot traffic has increased in Grand Rapids with new residential and commercial developments and strong urban growth. More citizens are walking to work and downtown, increasing the population of people on sidewalks and using crosswalks. Consequently, motorist crashes with pedestrians have risen.

Even in the winter months when fewer are walking because of snow and colder temperatures, each week local news media reports several motor vehicle pedestrian crashes. On December 23, 2013, for example, a woman driving an SUV hit and severely injured a teenager crossing the road in a designated, marked, and well-lit crosswalk near a school. The teenage pedestrian, Jacob Rodgers, was familiar with the crosswalk because he lived in the neighborhood and used the crosswalk at least twice a day to go to and return from school. Sadly, Jacob suffered a traumatic and disabling brain injury in the crash. Grand Rapids Police detectives continue to gather information about what happened, determining for example whether common motorist distractions such as a cell phone, eating food, adjusting the radio, or talking with a passenger played a factor.

Gathering Key Evidence Quickly is Critical to Protecting a Pedestrian’s

Rights to Reimbursement for Harms and Losses

Many motor vehicle accidents with a pedestrian are caused by driver negligence and failure to obey the rules of the road, such as yielding to the pedestrian’s right-of-way at crosswalks. Important evidence in these crashes include:

It is important for pedestrians injured in Michigan to protect their legal rights if they are hit by a motor vehicle. They, or family members, must seek the advice of an experienced Michigan attorney to immediately assist in gathering important evidence and protecting their rights to reimbursement for medical and attendant care, wage loss, and debilitating injuries.

If you or someone you love is injured as a pedestrian by an automobile, truck, or motorcycle, seek legal help immediately. Whether and to what extent you can recover reimbursement for your losses depends on correct application of Michigan’s No-Fault law. Often the insurance companies – even your own – will do everything possible to avoid paying what they owe; they will delay and employ legal tactics to deny reimbursements you should receive.

Here is a brief overview of Michigan No-Fault law for accidents where a motor vehicle hits a pedestrian.

If you are a pedestrian hit in Michigan by a car or truck, you are eligible to receive Michigan No-Fault insurance personal injury protection benefits (a first party or PIP claim). In addition, if the injuries are catastrophic or fatal, you also may be able to recover reimbursement for paralysis, scarring, disfigurement, disability, or suffering (a third party claim). If you are hit by a motorcycle, bicycle, or other vehicle not a car or truck, typically you are not eligible for Michigan No-Fault benefits.

Priority rules determine which insurance company is responsible for paying first-party No-Fault benefits to the injured pedestrian. The descending order of priority is:

3. The No-Fault policy of a relative who lives with you.

4. The No-Fault policy of the owner or registrant of the motor vehicle involved in the accident.

5. The No-Fault insurance company of the driver who hit you.

First party benefits include resulting medical expenses, lost wages up to 3 years, replacement services (e.g., household services such as chores, childcare), and attendant care (e.g., nursing services). Under the Michigan statute of limitations, a pedestrian must file a first-party claim within one year from the date of an accident.

A third-party claim is one against the “at-fault” (negligent) driver of a motor vehicle causing the accident. A third-party claim may provide reimbursement for excess economic loss (e.g., resulting loss of wages after 3 years) and noneconomic harms and losses from catastrophic injury such as paralysis, disfigurement, disability, scarring, or significant suffering. To qualify, injuries sustained must be severe and meet one of these three requirements:

Under the Michigan statute of limitations, a third-party lawsuit must be filed within 3 years from the date of the accident.

As you can see, if and to what extent you recover reimbursement for harms and losses from a motor vehicle-pedestrian accident depends on correct and timely application of Michigan’s No-Fault law. It is therefore important for an injured pedestrian, especially those who suffered severe injuries, to immediately seek help from a Michigan attorney who knows these laws. Even a relatively minor delay can result in losing rights to reimbursements.

At Buchanan Firm, we immediately review your claim with you for free by telephone or in-person, and if we undertake the claim we will help you obtain the reimbursements you are entitled to for harms and losses sustained. We are experienced and skilled at prosecuting claims of injured pedestrians against negligent motorists and successfully negotiating fair settlements with insurance companies. And, we successfully try these cases for injured pedestrians when insurance companies refuse to follow the law or do what is right.