Medical malpractice is the third leading cause of death in the U.S., accounting for about 250,000 deaths annually by some estimates. Medical malpractice occurs when a medical professional fails to provide a standard level of care to a patient, causing the patient harm. This standard level of care is defined as the type of care a reasonable medical practitioner with a similar background would have provided in the same situation – preventing the medical error.

That issue aside, examining this data can provide useful insights.  We analyzed 30 years of records from the National Practitioner Data Bank (NPDB) and found that 18,358 medical malpractice payments were made in Michigan between 1991-2020.

*Because new information was only available in NPDB data after 2004, some of our analysis focuses specifically on 2004-2020 data.

How have damage caps impacted the number of claims and average payouts over time?

Michigan is one of 29 states that have passed tort reform laws, or damage caps, to limit the amount of money a victim can recover from his or her medical malpractice claim. The idea behind damage caps was to reduce the economic burden, but it may have had the opposite effect – increasing the average payout over time.

Michigan is also one of seven states that adjusts its damage caps for inflation. In 2021, the standard cap for non-economic damages is $476,600, and the higher cap for cases involving permanent injuries is $851,000.

Damage caps were first enacted in the mid-1970s to respond to the perceived crises surrounding the cost and availability of medical liability insurance. Michigan first established a damage cap of $280,000 for non-economic damages in 1993. Non-economic damages include losses that are difficult to quantify, such as one’s pain and suffering or loss of enjoyment of life. In 2012, a bill was passed, clarifying that damage limits would also be applied to loss of companionship.

The introduction of damage caps seems to have had a direct impact on the number of medical malpractice paid claims. In Michigan, the number of paid claims declined from a high of 1,293 in 1994 to a low of 154 in 2020.

However, while the number of paid claims has decreased, the average payout has increased over time. Some studies show that damage caps may actually lower the standard of care that practitioners are providing and therefore, increase the amount of money owed in payments. In 1994, the average inflation-adjusted payout from Michigan medical malpractice claims was $139,343.  By 2020, had it increased to $209,691. 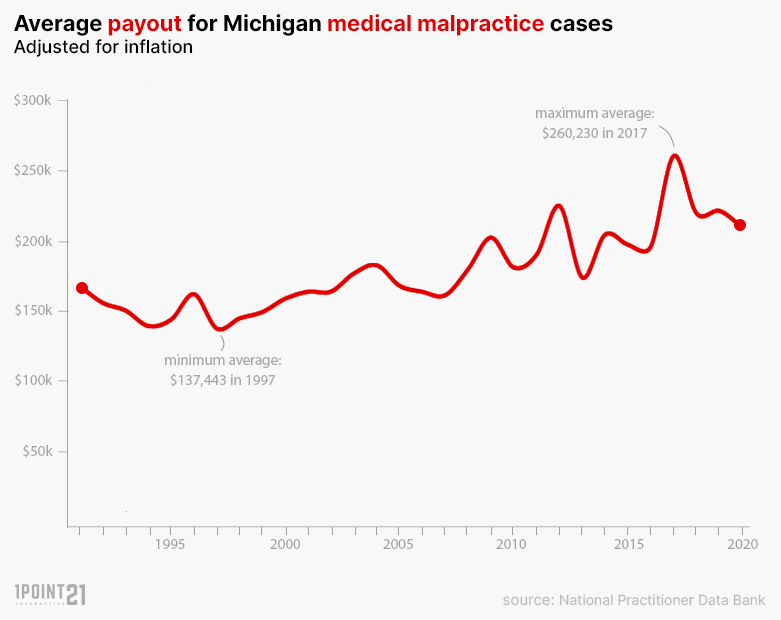 *Payment is reported in ranges. The average payout was calculated based on the median of each range.

In Michigan, women receive payments for medical malpractice more often than men, yet men receive higher payouts on average. From 2004-2020 (gender wasn’t recorded prior to 2004), there were a total of 6,107 medical malpractice paid claims in Michigan – 3,392 of the victims were female and 2,683 were male. The gender was unknown in 32 paid claims. Male victims received a higher inflation-adjusted average payout ($209,347) compared to female victims ($175,910).

Claims paid to unborn (fetal) victims had the highest inflation-adjusted average payout ($420,826), followed by those aged under 1 ($286,042) and aged 1-9 ($217,096). This makes sense as the license area with the highest average payout was obstetrics-related, involving pregnancy, childbirth, and the postpartum period.

Which areas of medicine had the highest average inflation-adjusted payouts in Michigan?

What were the most common allegations? 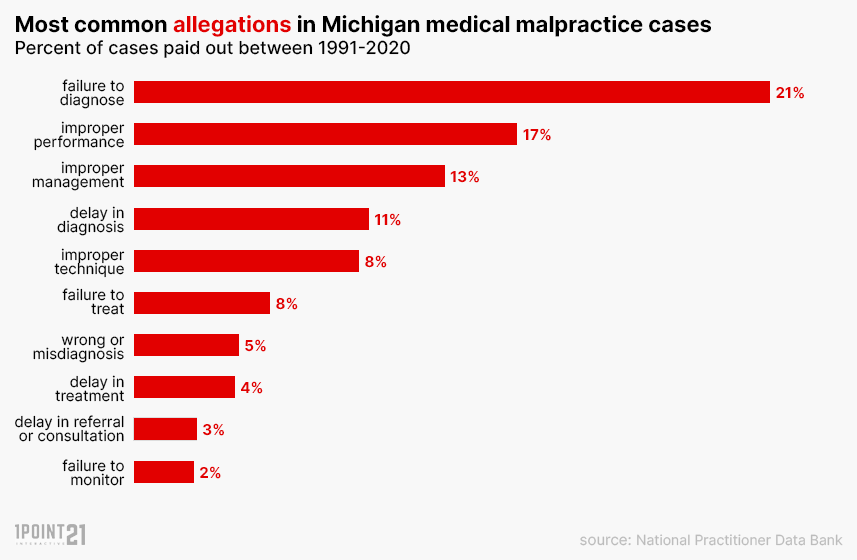 *3,279 payments were not classified with an allegation.

What were the most common outcomes?

Which outcome had the highest average inflation-adjusted payout?

While brain damage and quadriplegia made up three percent of outcomes, it had the highest average payout at $640,187– more than three times the average payout for when death was the outcome. 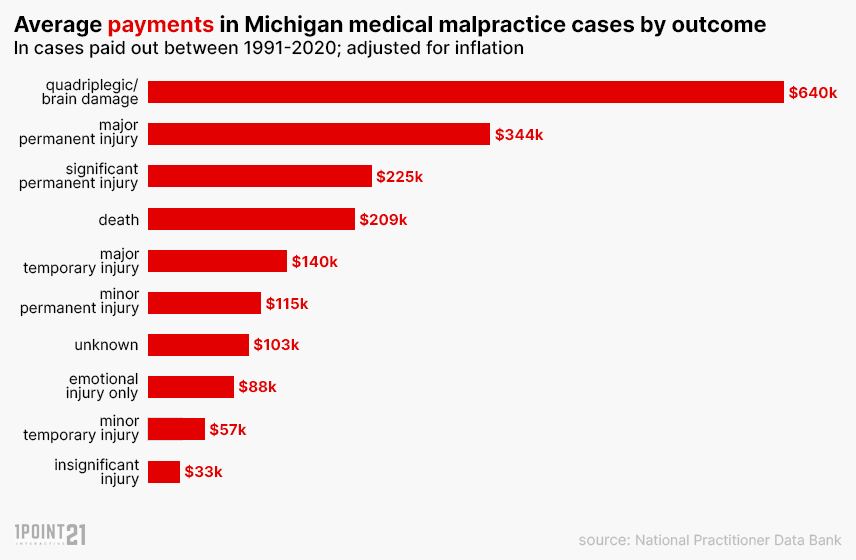 This seems logical as significant brain injury and quadriplegia would likely have the highest lifetime costs associated with them, in terms of medical care and lost wages.  It also explains why death comes in so much lower, as there would be no ongoing medical or care costs.

Which medical professionals accounted for the most paid-out claims?

Physicians (MD and DO) were responsible for 81 percent of medical malpractice paid out claims, followed by dentists. This makes sense since most medical professionals that treat and diagnose our illnesses, or handle general surgeries on a daily basis are physicians. Their average payout was $183,804. 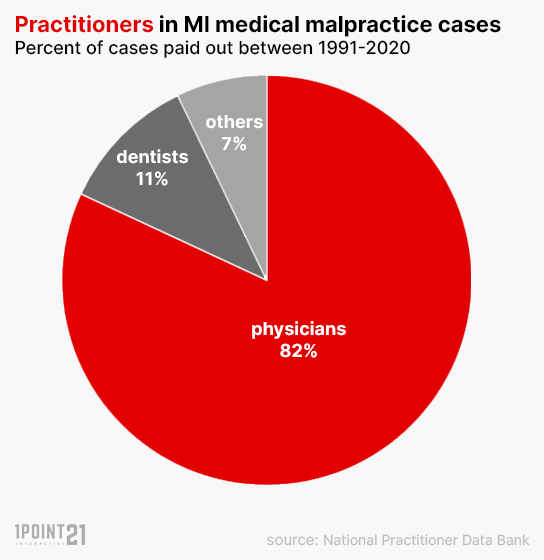 Licenses with the Most Medical Malpractice Payouts in Michigan

How do newer doctors compare?

Interestingly, resident physicians (MD and DO) accounted for less than one percent of paid-out claims but had a high average payout of $206,222.

What were the top five categories of mistakes for newer doctors?

What were the top five allegations for newer doctors?

What is the age of medical practitioners involved?

Who is the payer in most of the settlements in Michigan?

In 84 percent of medical malpractice payouts, the payer is the organization that employed the practitioner.

Medical malpractice is always a serious issue, but when it affects small children, it is even more tragic. In 2019, Buchanan Firm recovered medical malpractice and wrongful death settlement of $750,000 on behalf of Shelby Dorey, a mother who lost her 14-month-old daughter, Annabelle. In 2016, a physician’s assistant at Cherry Street Health Center in Grand Rapids, Michigan treated Annabelle for croup – an infection that blocks breathing and causes a characteristic barking cough. She sent Annabelle home with a prescription for steroids, instead of keeping her under medical supervision or sending her to the hospital. Hours later, Annabelle stopped breathing, and five days later, she died of hypoxic brain damage. The lawsuit filed against the clinic claimed that the physician’s assistant failed to provide Annabelle with adequate treatment, resulting in her death.

But Annabelle’s tragic situation isn’t isolated. We found that from 2004 to 2020, there were a total of 119 medical malpractice payouts involving patients between the ages of 0 and 9 (not including unborn babies). 61 were female and 58 were male.

*Payment is reported in ranges. The average payout was calculated based on the median of each range.

Which outcomes had the highest average payouts involving children?

Methodology and Fair Use

The data presented comes from the National Practitioner Data Bank (NPDB) of all Michigan medical malpractice payments in 1991-2020. However, because new variables were only available after 2004, some of our analysis is limited to 2004-2020.