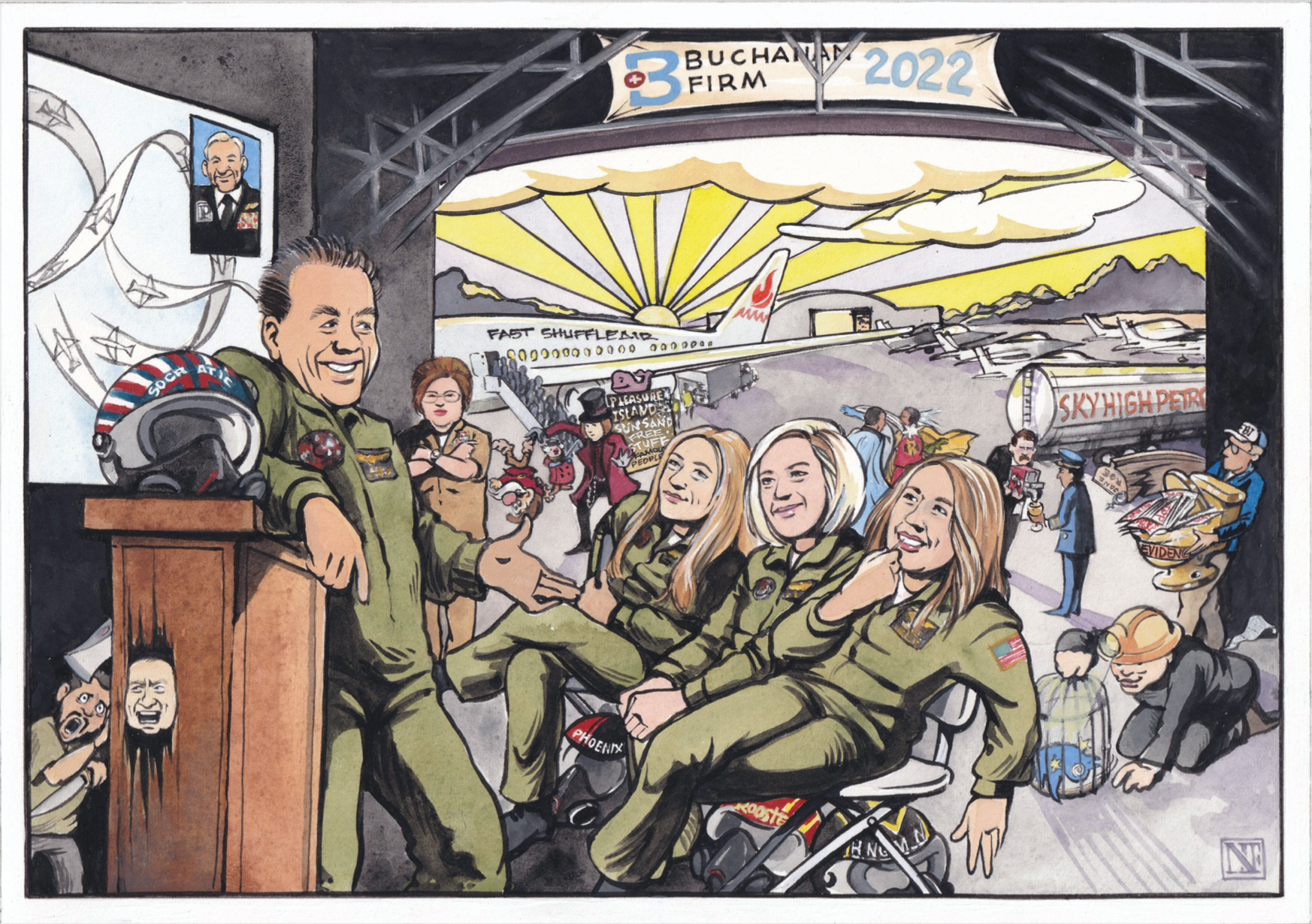 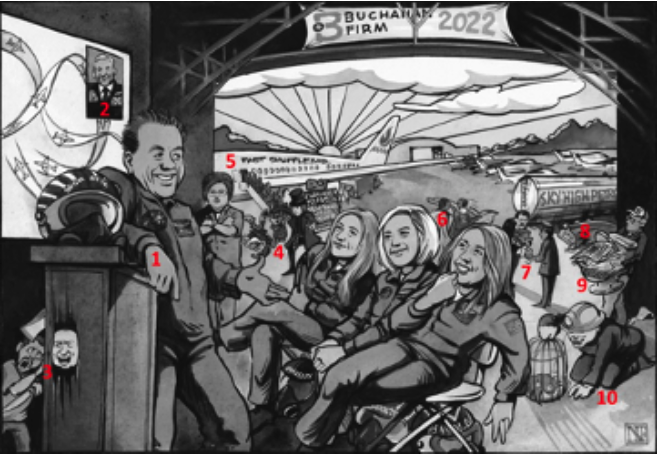 Let’s Give Them Mach 10. Life in 2022 has been a wild and thrilling adventure all year, like the blockbuster movie Top Gun Maverick starring Tom Cruise. The film has single-handedly resuscitated the movie theater industry, which was near death after Covid dropped the curtains two years ago. In our version of the story:

1. The Squadron. We find the Buchanan Firm team squadron in the ready room for a pilot pre-flight briefing before sunrise, rehearsing every detail of the day’s mission one last time before takeoff.

3. “Here’s Johnny!” On February 24, Russia invades Ukraine with 190,000 troops in a surprise attack, causing a global economic crisis and the largest refugee mess since World War II. Before the invasion, everyone predicted Russia (with a population three times larger) would overrun tiny Ukraine in a few days. But the bantam underdog, led by fearless comedic actor President Volodymyr Zelensky, defies all odds and fends off the Russian bear. Here, we see tyrant Vladimir Putin reenacting Jack Nicholson’s “Here’s Johnny!” scene of “The Shining” (1980), while Zelensky takes cover.

4. Dropping a Grumpy. The most watched jury trial of the year starts in April, sorting out defamation claims between former married actors Johnny Depp of Willy Wonka fame and Amber Heard of Aquaman stardom. Riveting courtroom testimony dominates social media and headlines for six weeks as the thespians deliver Oscar-worthy performances. In this scene, we see Depp reenacting what he claims Heard did in their bed, “dropping a Grumpy.”

5. Fast Shuffle Air. Starting in the fall, two celebrity Republican governors catapulted buses and airliners packed with undocumented immigrants to sanctuary cities (those that don’t enforce immigration laws) as a political stunt. For instance, in September, Florida governor Ron DeSantis dispatches two plane loads to swanky Martha’s Vineyard, Massachusetts. Though US leaders have a history of mistreating non-white people, DeSantis never learned about that because Florida lawmakers had torn out those pages from his history textbook. Here, we see the Coachman luring Pinocchio and other young immigrants onto a jet for a one-way trip to a naughty boys’ paradise, Pleasure Island.

6. The Punchline. At the 94th Academy Awards in March, actor Will Smith marvels the audience when he slaps the face of comedian host Chris Rock. Smith left fresh prints of despair, doing so either because Rock joked about his wife’s shaved head or because he was sick of Rock showing off his Wordle scores on Facebook.

7. A Glass of Your Finest Reserve. Gas prices hit record highs. Prices at the pump leapt when the European Union and United States imposed sanctions against Russia, the world’s second largest oil producer, for starting the Ukraine war. Here, we see a sommelier pouring the elixir into a wine flute.

8. Roeboat Springs a Leak. In May, a mole inside the US Supreme Court leaks to the press Justice Samuel Alito’s confidential draft opinion revealing a majority intends to strike down Roe v Wade, ending a half-century of federal protection for abortion rights. The next morning, Chief Justice John Roberts confirms the document is authentic. At the end of June, the Supreme Court officially overturns the landmark case, rolling back the clock on women’s rights to 1973.

9. Presidential Papers. In August, roughly 30 federal agents execute a search warrant at the Mar-a-Lago resort in Palm Beach, Florida searching for “top secret” documents improperly taken from the White House after Trump’s term in office. The agents find a treasure trove, including classified documents with Trump’s handwriting in the toilet and documents of nuclear defense systems. When asked about the cache, Trump explains he has been a good environmental steward in using obsolete documents as tail napkins after the nation’s toilet paper crisis.

10. Canary in a Coal Mine. In April, Billionaire Elon Musk agrees to pay $44 Billion to buy the social media site Twitter, and a month later reneges when the value of his Tesla automotive company rapidly declines. Twitter sues to enforce the sale, so Musk closes and takes control in October. He immediately fires the top executives and nearly all 7,500 employees, demanding slave labor. Twitter nosedives. It looks like the bluebird flew into a pane of glass and may not survive.